The Horror of War 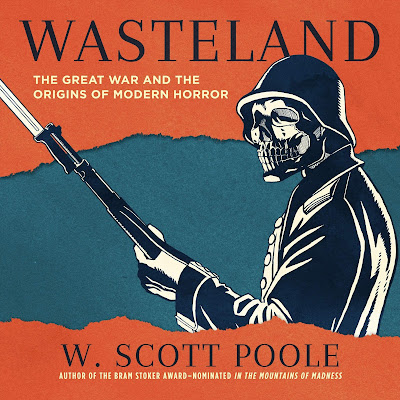 There are times where a few different things come to my attention at once that all have a similar theme. In the last month or two, it's been World War I, the subject of both a new Sabaton album called The Great War and the excellent book Wasteland, which connects the early days of horror films to the trauma inflicted by the war.

Sabaton, who have made a career out of translating epic historical events to heavy metal songs, seem ambivalent about World War I. The album is a mix of darker songs about battlefield terrors and upbeat tales of war heroes like Sgt. Alvin York, T.E. Lawrence of Arabia and Francis Pegahmagabow. It's understandable. Unlike World War II, where the sheer villainy of Hitler and the Nazis made it easy to place the conflict in the context of good vs. evil, there was nothing particularly noble about World War I. It began when Serbian terrorists assassinated a visiting archduke from the Austro-Hungarian Empire and the two nations went to war, both of them guilt-tripping allied nations into joining in. Four years later, 20 million people were dead and the Austro-Hungarian, Ottoman, German and Russian empires had all fallen.

The "war to end all wars" label was pitifully inaccurate, with WWI being immediately followed by years of brutal regional conflicts and another world war twenty years later. Even today's violence in the Middle East has roots in the Great War. With the Ottoman Empire gone, the region's future was uncertain. Lawrence of Arabia, who spent years in the region and understood the tension between the various ethnic identities, tried to convince his superiors that allowing the Arabs to decide their own future was the best choice. They ignored him and instead drew lines on a map that they felt protected their interests, remaking the region with no consideration of how the people who actually lived there felt. There's been unrest there ever since.

Wasteland isn't really about the politics of the war. It doesn't need to be. Frankly, just the sobering descriptions of how it destroyed so many lives are a strong enough statement. Deadly inventions like tanks, mustard gas and machine guns made their first appearance, destroying the human body in ways that were unthinkable. Cinema was in its infancy during this period and the book demonstrates how this carnage came to be symbolized in scary movies in ways that are still used today. Lon Chaney's famous makeup in The Phantom of the Opera was so horrifying to audiences in part because it resembled the maimed faces of returning veterans. The remorseless machine that runs the city in Fritz Lang's Metropolis was an effective stand-in for the machines of war that had scattered so many soldiers across the landscape with little effort. There are many more examples. Horror (in all its incarnations, not just movies) has always been a strange part of the grieving process that follows calamitous events. In public we eulogize, we make pledges to do better, we build monuments and lay wreaths. But the darker feelings like terror, despair and frustrated rage, the ones that we keep to ourselves for the sake of other people's comfort, need somewhere to go.

Here's an excerpt that I wish I could read out loud to everyone I know, but this will have to do. Slight edits for clarity.

"Horror did not begin with the Great War, although the sheer weight of diabolical celluloid unleashed on the world after 1918 makes it seem like it did. However, something did change after Passchendaele, Gallipoli, the Somme and Verdun. On a geopolitical scale, the world would not suddenly be set right...the world changed and so what frightened us changed. Horror became our fundamental approach to the world. Too much death and suffering, on a scale unimagined before, unhinged us. The piles of bodies, an entire generation wiped out, could not be forgotten. Much of the entertainment we consume - romantic comedy, action, superheroes - are efforts to hide from these realities. Horror, even at its most escapist, brings us to the edges of the last century's wastelands.

The malignant, festering wound of the Great War holds our attention still. Like a series of images in a nightmare detached from sensibility and chronology, the smoke, mud, blood and dismembered bodies of the trenches flicker behind the images of our films, the color and tone of our art, and the need to read books that unsettle us deep into the night. The horror that has come to nest in the center of our culture grew out of this history. It's a horror that paralyzes us like a night terror even as it has become part of a multi-billion dollar entertainment industry.

The corpses in the wasteland of past and present haunt us...we cannot awaken from history."

The controversial horror comics of the 1950s have a similar relationship to World War II. The atomic bomb and Godzilla. Vietnam and racial violence of the 1950s and 60s were reflected in Night of the Living Dead and a golden age of horror that lasted for the next decade. The torture-themed horror of the mid-2000s and Abu Ghraib. Even something as noxious as A Serbian Film is a product of barbaric war crimes perpetrated against civilians in the Balkan Wars of the 1990s. Pennywise the Clown is back for an era in history where the President of the United States is a psychopathic clown determined to hurt children. Okay, maybe that one is a stretch but you can bet our current national mood of Nazi nostalgia and concentration camps for kids is going to produce some truly ghastly movies in a few years.

People often say "Why do we need horror? The real world is scary enough!" Yes, that's the point. A generation of Europeans saw their homeland bombed into smoking mud pits full of corpses. You can't fix that with yoga and positive thinking. It needs to be processed. It needs to be reckoned with, even if the creators and/or the audience aren't totally aware of the connection. So if the movies still bother you, you should probably tell real life to take it down a notch.
Posted by Norphen at 7:10 PM No comments: