My previous posts about Gargoyles are the most popular in the history of this blog, but I wasn't sure the situation would ever be resolved. After eight years of fans waiting and pleading with Disney, they finally just put this baby out with no fanfare whatsoever. Perhaps this was the set that was originally going to be released last Christmas but didn't show up for whatever reason. I first heard the news on Facebook, of all places. For the last six months or so, the Gargoyles page (which previously had been mostly inactive) was offering links for fans to stream the episodes one at a time. It seemed out of the blue and I suspected something was going to happen with these DVD releases soon.

Technically, this doesn't complete the series, but it's close enough. After the mammoth second season, the show was changed to Gargoyles: The Goliath Chronicles and continued for another short season. However, series creator Greg Wiseman only wrote the first episode and Season 3 is considered vastly inferior and outside of the canon. Plus, if I remember right, the epic three-parter that concludes Season 2 ends on a satisfying note.

So what are we waiting for? Here's the link on Amazon. The price is steep, even after being reduced by Amazon, but I guess Disney wants to be sure they turn some kind of profit on this since that's the reason they dragged their feet for so long. If you remember the show, you know it's worth it. Mine's already on the way.
Posted by Norphen at 11:23 PM 1 comment:

In the summer of 1993, the various Spider-Man comic titles teamed up for a huge fourteen-part crossover featuring the massively popular villains Venom and Carnage. As a kid, I dragged my mom to comic shops all over the place to make sure I had every installment. Today, "Maximum Carnage" is remembered more for the popular beat-em-up video game it inspired and those who recall the actual comics tend to derisively refer to it as "Maximum Garbage" and present it as a brainless poster child for the excess of 1990s comics. I'd argue The Clone Saga is a much better example of the latter (plenty about that here), but I still have a bit of soft spot for "Maximum Carnage." When it first came out, my younger self thought it was the most epic and awesome thing I'd seen in comic books. My reaction to it is much more complex as an adult - there's a lot to criticize but there's also more meat to this story than it's usually given credit for. You can call it many things, but "brainless" isn't one of them.

Setting the scene for this storyline requires a ridiculous amount of explanation, but I'll try to be as concise as I can. Everything really starts with Venom, the name Eddie Brock took for himself after bonding with the sentient costume briefly worn by Spider-Man. Brock was clearly unstable, but not necessarily a danger to the public in the way that other supervillains are. He didn't want to take over the world, he just had one goal - kill Spider-Man. What made him especially dangerous was that he knew Spidey's secret identity, although he kept to himself since he didn't want other villains taking him out first. At one point, the living costume breaks Eddie Brock out of prison but leaves behind its child. This creature joined with Brock's cellmate, the certifiable Cletus Kasady, and Carnage was born. This was a vicious serial killer with the ultimate weapon and Spider-Man and Venom decided to put aside their differences and deal with him. Not long after Carnage's defeat, the two of them reconciled and Brock went to San Francisco to start over.

"Maximum Carnage" starts immediately after the death of Harry Osborn, the second Green Goblin and Peter Parker's longtime friend. It was also during the storyline where his parents, presumed dead for 20 years, suddenly reappeared. They would later be revealed as robots, but let's not get into that. It's a stressful time for the Parkers and Mary Jane manages to persuade her husband to take a break from the Spidey activities. He begins this vacation on the same day Carnage breaks out of the asylum - typical Parker luck. Perhaps he could have kept his promise if more traditional villains were on the loose, the ones who were more prone to petty theft than murder, but Carnage was far too dangerous for him not to intervene. Worse still, he begins assembling a team of other murderous villains to join him in his bloody rampage through New York. They include Shriek, a drug addict and former groupie (probably with Kiss, judging from her makeup) who can fire blasts of sound energy, Spider-Man's evil doppelganger from the "Infinity War" event, Demogoblin, the physical manifestation of a demon who had once possessed The Hobgoblin, and Carrion, a failed genetic experiment with a decaying touch. They take on a grotesque "family" relationship that's clearly meant to draw comparisons to Charles Manson. 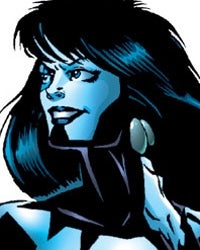 After hearing of Carnage's return, Venom heads back to New York and stupidly takes on Carnage's posse by himself. Barely able to escape with his life, he is forced to turn to Spider-Man for help. The question of just how to deal with Carnage's gang, and the New Yorkers who are beginning to riot as the city destabilizes, forms the backbone of the story. "Maximum Carnage" is ultimately about the conflict between classic "truth and justice" heroes like Spider-Man and the new, more popular violent antiheroes represented by Venom. During an introduction for the collected saga, writer J.M. DeMatteis comments that "I'd had my fill of the pyschos and mass murderers running through the pages of half the comic books on the stands, and those were the heroes." The storyline becomes a lot more interesting with this in mind - it pushes back against the increasing popularity of lethal enforcers like The Punisher in the same way that DC's more polished "Kingdom Come" story would a few years later.

Spider-Man and Venom gather a large team of heroes to help their effort, but they just can't see eye to eye. "You're too soft, too weak!" Venom snarls at one point. "You'll never be like us!" Spider-Man quips, "Best news I've heard all day." The heroes split into two groups to try and deal with the crisis in their own ways. On Team Venom is the vampire Michael Morbius, a former enemy of Spider-Man, Spidey's ex-girlfriend The Black Cat, and Marvel's Spawn rip-off Nightwatch. The vigilante Cloak fights alongside Venom for a while, but is so distraught over the death of his partner Dagger at Shriek's hands that he grieves on his own for a long time before eventually switching to Team Spider-Man. Spidey's allies include his longtime friend Firestar, the cyborg Deathlok, the mystical martial artist Iron Fist, and Captain America himself. It's a stretch to believe that he didn't bring the rest of the Avengers with him, but I guess the writers knew Carnage wouldn't last long against the likes of Thor and The Hulk.

The ethical conflict also plays out among Spider-Man's loved ones. His father, Richard Parker, was left with a dim view of humanity after his experiences during the Cold War and would certainly be sympathetic to Venom's methods. Meanwhile, saintly old Aunt May knows that Spider-Man's compassionate approach is the right one. Mary Jane, incredibly stressed and conflicted, drifts back and forth but ultimately sides with Aunt May.

So we've established that "Maximum Carnage" is surprisingly rich in its themes, but that doesn't make it perfect. It's frequently compromised by an inconsistent tone that resulted from four different writers working on the various parts. This is especially problematic when you're dealing with material as dark as mass murder and urban chaos. You can definitely tell this was made during the early 1990s, a time of relative peace and prosperity. In today's world, a story like this would be told with drop dead seriousness. As an example of how wildly the writing varies, I'll show two excerpts. The first is from DeMatteis and depicts a turning point in the saga. Click here and then here.

You have to admit...that's an awesome moment. On the other side of the spectrum is the writing from Terry Kavanagh, whose writing I knew was awful even as a 10-year-old. I had to scan this one myself, for some reason the internet's not in a hurry to share this moment. Check it out here.

So Carnage, the working class nutcase who didn't even finish middle school because he was too busy killing people, suddenly sounds like Dr. Doom. "Your pathetic arrogance, fools, will be your very downfall!" Jeez, with lines like that, it's no wonder people made fun of me for reading these comics. That groaner is a good example of the major issue with this story - some of the writers are just not taking it seriously and going on autopilot with the usual trading of punches and lame quips even though the subject matter demands more.

The ending of the story, which really stretches the suspension of disbelief, gets a lot of ridicule from Spidey-fans. First, Dagger uses her light-based powers to reconstitute herself in the depths of Cloak's huge cape. Her attempts to reach out to Shriek, who nearly killed her, inspire the others. They run off and grab a crackpot device that's described as a "biofeedback machine designed to amplify the brain's calming alpha waves." The contraption causes most of the villains to pass out, but Carnage uses the confusion to fake his own death. When most of the other heroes have gone home, he emerges one last time to confront Spider-Man and Venom. As they both battle Carnage, they have their final philosophical debate. Finally, Venom defeats Carnage by grabbing him and then throwing himself into a generator. Both survive the resulting explosion and Carnage is placed in the custody of The Avengers while Venom skulks off and begins his long trek back to San Francisco.

As for the final verdict on the dueling schools of crime-fighting thought, the story seems to arrive at something of a compromise. Venom's final act shows that even deeply flawed "heroes" are still capable of real selfless acts, but it's also clear that his rival's philosophy has left an impression. "I find myself haunted by Spider-Man's words," he admits, wondering if the insane Carnage is "an object of hatred...or pity?"

It's easy to see why this story still has so many detractors. During an era when Venom and Carnage were grievously overexposed, "Maximum Carnage" was their most famous appearance. The 14-part length can be exhausting, especially when you get the sense the story could have been told in half the time. It's also a little odd that the writers come out so strongly against the dark violence of that era's comics when they take so much time to depict Carnage's rampage. Then again, would the uplifting conclusion be effective if the readers hadn't been dragged through darkness for so long? Tough question. In the end, I think its detailed commentary on the creative trends of the time it was made in will continue to interest those who explore the history of superhero comics.
Posted by Norphen at 9:47 PM No comments: