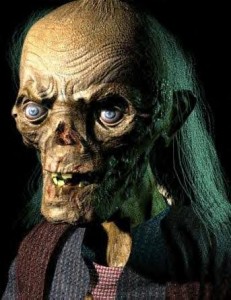 Korman’s Kalamity: Tales from the Crypt goes meta with this story about a horror comics cartoonist named Jim Korman (Harry Anderson) whose drawings start coming to life. It’s a fun idea, but in practice is a little too over the top, with intrusive music and lazy characterization. In particular, Korman’s ridiculously obnoxious wife (Colleen Camp), more of a cartoon than anything on Korman’s pages, almost singlehandedly ruins the whole thing. If today’s network of feminist blogs existed in the early 1990s, they would have ripped this episode a new one. Still, it’s salvaged a bit by great creature effects. B-

Lower Berth: The Cryptkeeper’s origin story is actually quite serious, told without the host’s trademark humor, but then again it’s pretty funny in retrospect. It’s a colorful tale full of sideshow freaks and exhumed mummies set in the era of classic horror. The mood and atmosphere are so potent, combined with amazing makeup effects (the show in general is very good at this) that this could be mistaken for an episode of The X-Files. A-

Mute Witness to Murder: This great Hitchcockian episode tells you all you need to know in its title. Patricia Clarkson plays the woman (blonde, naturally) who is so traumatized by her sudden discovery that she loses her voice. The psychologist who ends up treating her…is also the murderer (Richard Thomas). The moody, eerie episode does a great job backing Clarkson’s character further and further into a corner, providing very effective suspense even though some clues about the ending wind up being a little too obvious. A-

Television Terror: The Blair Witch Project is usually given credit for inventing the “found footage” gimmick within the horror genre, or maybe Man Bites Dog if you’re a little more cinema savvy. However, its origins go back a little farther than that. The use of it for one key scene in John Carpenter’s Prince of Darkness is arguably the scariest moment in that film, and before that, Ruggero Deodato’s infamous Cannibal Holocaust pioneered the use of it to add verisimilitude to on-screen violence. Early use of it also pops up in this episode, starring Morton Downey, Jr as a megalomaniacal Geraldo-esque TV host exploring a supposedly haunted house. The style was still too new for this episode to use it to its full potential, but that’s no problem. This is crass, cynical fun with excellent pacing up until its epic finale. A

My Brother’s Keeper: Timothy Stack and Jonathan Stark play Siamese twins who are literally joined at the hip. One is a cultured gentleman and the other is a boorish psychopath. When one of them falls in love, it brings tension between them over a potential separation procedure to the surface. Of course, this is Tales from the Crypt and romance is never simple. This episode mines its premise for increasingly silly slapstick and sit-com humor but then shifts dramatically into an ultra-dark ending that’s satisfying even if it doesn’t feel especially earned. B-

The Secret: A melancholy fairy tale about an orphan with a mysterious condition who is adopted by a highly eccentric family. You’ll be able to guess one of the twists right away, which can make this one a bit tedious as you wait for it to get to the point. Still, this episode is strikingly different in tone from most of the series thus far and has a lot going for it. The cast includes David Lynch regular Grace Zabriskie and Larry Drake, who played the evil Santa last season, and it always looks fantastic, thanks to the direction of veteran set designer J. Michael Riva. A-

Nice run of episodes there! In general, Season 2 seemed a lot more consistent, but the series still occasionally has trouble balancing its love of ironic humor with real fright. Not to say that I'm not still enjoying myself immensely. On to Season 3!