The movies that truly frightened me

I'd like to note right off the bat that this is not necessarily a list of "recommendations." Some of these I'm not sure I'd actually recommend to anyone. It's a list of the movies that got through the hardened exterior of a shock-cinema veteran and sent me away freaked out. Some are old terrors from my childhood, others I've seen fairly recently. Proceed at your own risk!

A Nightmare on Elm Street (1984) - One from my childhood days. Repeat viewings and my advancing age would ultimately dull the impact, but the first time I saw this, I got freaked right the hell out. There's something totally ingenious about the concept of a villain who attacks in your dreams...think about it, if you watch this movie, get scared, and then go to bed and have a nightmare where Freddy appears (as I did, back then)...you're experiencing exactly what the characters do. There's no way to be sure you're safe until you wake up...hopefully alive.

Ju-On (2003) - One of the only horror films released in the last decade that scared the crap out of me - not to be confused with the dumbed-down American remake. From the gritty, terrifying opening to the breathless finale, this movie was a knockout that really got at some primal fears. This particular film can be polarizing - this ghost can do a hell of a lot more than just knock a picture frame off the wall, her powers are so crazy that it can often lead viewers to say the movie doesn't make sense. I'd argue that's the point - the characters are facing something with power beyond their comprehension - as soon as you enter that house, you're powerless.

Cannibal Holocaust (1980) - Do a google image search for this movie at your own peril - it took me a while to find a picture I even felt comfortable posting. A popular true story about this film is that the crew had to go to court to prove that one of the cast members wasn't really killed during production. Yes, the gore effects are that impressive. Almost thirty years after its production, it remains one of the most brutally violent movies ever made and has an interesting commentary on human nature. Unfortunately, what detracts from an otherwise effective, intelligent movie is that real animals are killed on screen - in lengthy, nauseating detail. It's a revolting attempt to wring some extra shocks out of the audience. This was one case where being disturbed did not mean the movie had done something right. The "most controversial movie ever" label is a little much, but it's close.

Martyrs (2008) - The unbelievable, spectacular brutality of this movie (one of the most memorable additions to the current French wave of horror) knocked me right on my ass. The story chronicles a young girl who escaped after being brutalized by some sinister shadow organization. She has visions of a decaying, demonic creature...and it's some of the most horrifying makeup I've seen in years. Eventually, the plot takes a crazy left turn and introduces some wild, intriguing ideas into the narrative. This film would be an outright masterpiece if it weren't for the third act - a protracted sequence that seems ripped right out of Saw or Hostel, two lesser franchises a film like this has no business borrowing from. Still, I'll never forget this movie. Only recommended for the hardcore - seriously, if you have any reservations about your own reaction to violent images, stay far away. 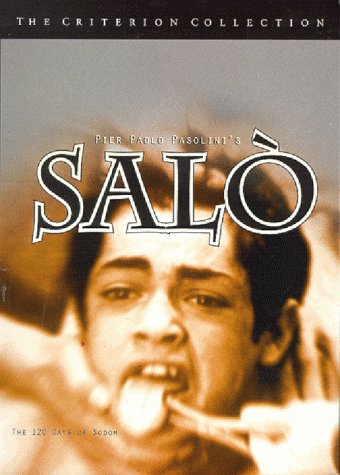 Salo: The 120 Days of Sodom (1975) - A film so disturbing and shocking it may have gotten its director killed. Pier Paolo Pasolini was murdered the same year that his final movie opened, and the case has never been fully explained. This movie is very ambitious thematically, it aims to show the horrifying results of authoritarianism unchecked, as a group of wealthy fascists in Mussolini-era Italy kidnap a group of young children and proceed to hurt and humiliate them in methods inspired by the writings of the Marquis de Sade. All the revolting proceedings are filmed dispassionately and without cinematic excess, which makes it all the more frightening. This is not a movie that gave me nightmares, but I felt unsettled and just plan crappy for the rest of the day. This film almost always tops "Most Disturbing Movies Ever" lists, and with good reason. Imprint (2006) - No list of twisted cinema is complete without Takashi Miike...but which one to add? Audition has its moments, but in the end, I shook it off pretty easily, and Ichi the Killer's gore is too cartoonish to be all that disturbing. Imprint is an episode of the "Masters of Horror" series on Showtime, which invited revered horror directors to contribute to the anthology. The series paraded its "edginess," but in the end, Miike's entry was too, well...edgy. It wound up going straight to DVD. Imprint takes on a lot of themes you don't often see explored in mainstream film, and damn it's nasty. Of particular note is the final revelation, which features gruesome makeup and hideously effective sound work.

The Exorcist (1973) - The big one. You may have noticed that a lot of the movies on here are foreign. American horror certainly has gotten bloodier, but it's been a long time since someone made a film as complex and unnerving as this legendary film. I think everyone knows the story by now, and this classic continues to inspire nightmares decades since its release. I saw this movie when I was 14, and went many nights without a good rest. I haven't seen it since, and I get the feeling I would be able to take it now. Still....why can't I work up the nerve to watch it?

They (2002) - This one greatly disturbed me...because it was so terrible! Why Wes Craven put his name on this I'll never know. About ten minutes in, a loud guy with an afro got up and walked out, shouting loudly "This movie SUCKS, YO!" Looking back, my friends and I should have joined him.

Happy Halloween!
Posted by Norphen at 1:38 PM No comments:

The Future of this Blog

Whenever I start a blog (and I have authored many over the years), there's always a certain amount of pressure to maintain it and add content regularly. Unfortunately, for a while now, it has felt like too much effort to put fingers to keyboard and produce something substantial. I don't really care for smaller entries like "I got a raise! Hooray!" (incidentally, that entry would be classified as fiction).

Very rarely do I feel compelled to share anything about my personal life. Not because I don't trust readers, I do. It's more a question of me wondering "Does anyone really want to know this?" If so, I could go on at length about my recent horrific car accident and the lingering whiplash that keeps me from even sneezing successfully because the pain in my chest is too much. But that's depressing and to go into details would probably bring back the flashbacks, which I can do without. Personal life can be pretty interesting, in fact, with enough Harvey Pekar-esque minutiae and comedy, it can be really fun. But I just don't have that in me.

Politics is exhausting. I still read my collection of favored websites each day and get some info, but trying to maintain a political-themed blog is a real hassle. The internet and 24-hour cable news networks create for a climate of constant "revelations" and "alerts." As a political blog, you feel like you have to give your two cents on each one...and who really has time for that...unless it's your sole profession. In that case, I would do it happily, because that's a hell of a racket. But honestly, there's so much political commentary on the web that just about any thought I have has probably already been expressed somewhere else.

Master of the Wind is difficult to blog about when it's in production. I don't like to reveal story details, and posting updates just to showcase new sprites/maps/etc just makes me feel like a tool. The MotW website generates enough activity on its own by now. Once the game's done, though, things might change.

So what's that leave? Well, one subject that always really gets me in the mood to write is movies. Unlike most film buffs with a blog, I actually have a degree in Cinema Studies and am highly qualified to talk about it. The sad thing is, professional film criticism informed by any kind of actual scholarship rather than just someone's kneejerk opinions is a dying art. Because I get so little use of that degree (thank God I studied journalism also), that's probably why I feel so compelled to write on this subject.

I always dissect and hypothesize during Oscar season, which I know some people find baffling. The Academy routinely makes boneheaded decisions and often just goes with whatever movies have the strongest publicity campaign, but I can't help trying to guess the results each time. After all, I don't give a shit about football or baseball or any other sport, this is really all I have when it comes to following pointless competition.

So I'm guessing this will be primarily an Oscars blog, inactive for most of the year but busy when the movies start going head to head for that gold statue. Though if other inspiration strikes, it may find its way here...I've had a Halloween themed idea for a while now, guess I should hurry if I want to be in time. Try and remember me when Oscar season starts!
Posted by Norphen at 12:54 PM No comments: