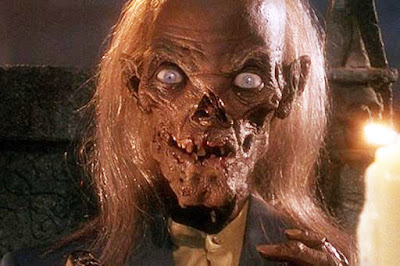 Showdown: Despite the intriguing possibilities, the Western and Horror genres are rarely mixed, which makes this episode a nice change of pace. It’s also directed by Richard Donner so we know we’re in for something good. Wild West scoundrel Billy Quintane (Neil Giuntoli) wins a classic face-off with a Texas Ranger (David Morse) only to find that the ghosts in the ghost town he’s hiding in are all people he’s killed before. There are a number of major twists which were later ripped off by some very well-known ghost movies. Donner nails the Western imagery and atmosphere although I do wish it was a little scarier. A-

King of the Road: A middle-aged father and police officer (Raymond J. Barry) keeps quiet about his past as a legendary drag racer, but a slimy young punk (Brad Pitt) has tracked him down and challenges him to a race. He’s not interested but the psycho won’t stop invading his privacy until he agrees. It’s often one-note and feels like an episode of a different show, but the unexpected ending is a real surprise that’s darkly hilarious. Warren Zevon (“Werewolves of London”) contributed several songs to this episode. B-

Maniac at Large: John Frankenheimer directed this episode about a meek librarian (Blythe Danner) working late while a serial killer roams the streets. Seeing threats everywhere, she begins to go crazy with paranoia despite the tepid reassurances of her domineering boss (Salome Jens). This was based off a story in EC’s “Crime SuspenStories” series, which means the horror elements are toned down but the ending is a perfect example of how edgy these comics were in their day. B

Split Personality: The Cryptkeeper suggests parental guidance, as in “guide your parents out of the room so we can have some fun!” Joe Pesci is excellent as a con man obsessed with the number two who meets a pair of rich twins ((Jacqueline and Kristen Citron). Hoping to get his hands on their inheritance, he invents a twin brother to try and marry them both. The twins seem like naive dingbats for most of the episode, but the tables are turned with an incredibly sick finale. A-

Strung Along: Donald O’Connor (yes, the guy from Singin’ in the Rain) plays an aging puppeteer who gets invited to a tribute show and trains a younger assistant (Zach Galligan) to help him out. He also begins to suspect that his young, controlling wife (Patrice Charbonneau) may be cheating on him. There are two big twists, one you will likely see coming and another one that you won’t, because it makes no sense. The casting of O’Connor, whose best known work was in the 1940s and 50s, really sells the character but the episode suffers in comparison to the outstanding Don Rickles puppet episode from Season 2. B

Werewolf Concerto: In this straightforward episode, a werewolf is terrorizing a ritzy hotel. The manager (Dennis Farina) has assured his guests (which include Timothy Dalton, Beverly D’Angelo and Reginald Veljohnson) that a specialized hunter is on the job, but that person wishes to remain anonymous. Who is the werewolf and who is the hunter? The answer is not as simple as it appears. The makeup effects are impressive, although the story relies far too much on misdirection. B-

Curiosity Killed: Actually, it didn’t. Not really. That’s the least of the problems with this lame season finale where a bickering old couple (Kevin McCarthy and Margot Kidder in old age makeup) meet some friends on a camping trip. The wife thinks her husband is plotting to get rid of her, but it’s not quite as simple as that. There are some neat effects near the end, but this mostly just feels like killing time. C

So that's Season 4. Despite the major star power in these episodes, I think in general this one was on the weak side. Three more seasons to go so let's hope there are still some great ones left. Till next year, boils and ghouls!
Posted by Norphen at 4:28 PM No comments:

Labels: Horror, Tales From the Crypt

Tales From the Crypt: Season Four, Part One 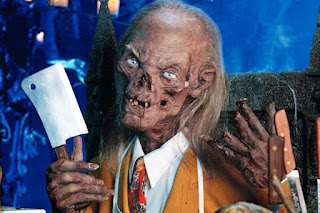 So this series vanished for a long time, eh? Sorry about that. I got off to a strong start but life got in the way and it took a long time to pick it up again. What I plan on doing is going through one season each October for the next couple of years so we'll do Season 4 this year and Season 5 will come in 2018. Get ready for more misbehavior, gore and bad puns!

None But the Lonely Heart: Treat Williams plays a vile con man who romances wealthy older women and then poisons them to get their money. In the midst of his latest scheme, he discovers that someone is on to him and paranoia makes him more dangerous than ever. Spending 20 minutes with this bastard is wearying but the unexpected ending is out of step with everything that’s come before…in a good way. Tom Hanks directed this episode and has a small role. B-

This’ll Kill Ya: The opening of this episode is lifted straight from the film noir classic D.O.A. - an amoral pharmaceutical executive named George (Dylan McDermott) walks into a police station to report his own murder. It’s another story of a jerk who eventually gets what’s coming to him, but things pick up when George is accidentally(?) injected with an experimental drug. The ending is satisfying, but as a whole this one feels like parts of previous episodes mixed together. Even the name is easily confused with “Easel Kill Ya” from Season 3. C+

On A Dead Man’s Chest: William Friedkin of The Exorcist directs this episode, which is the raunchiest one I’ve yet seen. It’s chock full of nudity, swearing and some seriously bloody mayhem at the end. A selfish rock singer (Yul Vasquez) gets a strange tattoo from a mysterious artist (the musician Heavy D) and it seems to have a life of its own. It’s lively fun with an interesting cast - Tia Carrere and musician Gregg Allman have supporting roles. Naturally, the band is named “Exorcist.” B+

Seance: The Cryptkeeper does his best Humphrey Bogart impression (complete with a terrible closing Casablanca-inspired pun) for this engaging hybrid of film noir and ghost story. Two bickering con artists (Cathy Moriarty and Ben Cross) pull an elaborate swindle on Mr. Chalmers (the late, great John Vernon) only for the scheme to backfire and accidentally cause the man’s death. Now they hope to fool his wife with a fake seance. You can figure out the ending right away, but the final scene is very well executed. B+

Beauty Rest: Mimi Rogers plays Helen, an actress who keeps losing roles to younger competitors. Whens he finds out about a beauty pageant where the winner gets to be a company spokesperson, she becomes so desperate that she begins to murder her rivals. Naturally, winning the pageant turns out to be bad news and the ending twist is bizarre (and would have been more effective with better special effects). Rogers is able to make her character a little more sympathetic than the usual antiheroes of the show, but the glib way the film treats the sexist elements of show business can be a little off-putting. B

What’s Cookin: Christopher Reeve plays humorously against type as Fred, an arrogant chef who, along with his long-suffering wife (Bess Alexander) runs a restaurant that serves only squid. For some reason, the public isn’t particularly interested and the couple faces bankruptcy until one of their employees (Judd Nelson) introduces them to a mysterious new recipe. Fred discovers the truth about halfway through in a disgusting (and yet somehow delightful) reveal and Reeve’s natural charisma makes you root for his character no matter how ghastly things get. A funny, engaging and enjoyably twisted episode. A-

The New Arrival: An arrogant psychologist (David Warner, making his character highly hateable) with a radio show is about to lose his gig due to low ratings so he comes with the idea of broadcasting episodes from the home of a mysterious woman (Zelda Rubenstein) who is constantly calling the show complaining about her daughter. Something is definitely very wrong about this child, but the episode wisely keeps her hidden until the very end, nicely building anticipation. B+

Posted by Norphen at 3:12 PM No comments: