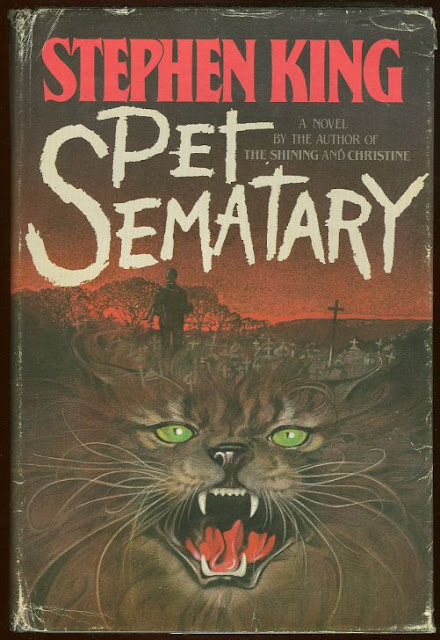 The scariest thing in the world is not a serial killer, zombies or a demonic clown. It's losing someone you love. Stephen King knows this and that's why Pet Sematary is the most heartbreaking and terrifying book he's ever written.

After I was finished with It (which I have already written a great deal about), I was eager to read some of King's other work and Pet Sematary was a title I had heard often. While only about one third of the length of that doorstopper, Pet Sematary has an even more profound emotional impact. There were times when I stopped mid-paragraph just to marvel at the power of what I was reading. I guess you could say it resonated on a personal level, but in theory it would resonate with anyone who feared the death of their loved ones. It's a great book that I'll probably never be able to read again.

A doctor named Louis Creed moves to rural Maine with his wife Rachel and his two children, Ellie and Gage. They look like an ideal family but both parents are struggling. Louis is having visions of a young man who died during his first week at work and Rachel has spent her adult life dealing with the trauma about her older sister Zelda, who died of spinal meningitis. Their new neighbor is a kindly older man named Jud Crandall and when Louis saves his wife after she has a heart attack, Jud wonders how to repay him. He gets his chance when the family cat Church is run over by a car on the busy road in front of their house. There's an old cemetery where kids have buried their lost pets (spelled "sematary" of course) and in one special area, animals can be returned to life. Church is resurrected and the kids are none the wiser, even though the cat is acting a lot less friendly.

So a surly cat doesn't sound all that scary, but what happens if a person is buried there? The horrible temptation presents itself when Gage is killed by a truck. The aftermath and funeral are given much attention which does a lot to establish Louis's fragile state of mind. Jud knows what he's thinking and warns him against it, sharing stories about other people who tried to resurrect family members with nightmarish results. But grief gets the better of Louis and Gage returns as a murderous little abomination. By the end of the book, Louis has gone completely insane and his own death is imminent. A lot of King's novels have a bittersweet ending but not this one. He twists the knife in every way possible and it's pure horror.

I think it works so well because it tells a truth that is rarely spoken aloud. Think about how movies typically portray grief. People are sad but a main character won't give up. How many times have you seen a movie or a TV show where someone grieving goes back into work earlier than expected? The co-workers whisper to each other and the boss brings them into the office and tells them they can take more time off if they need it. But the character will say they "just need to work." How American is that, huh? "Get this grieving stuff out of your system so you can start making us money again." And sure, this does work for some people. But I respect this book a lot for having the guts to say that there are some tragedies that are so terrible that things will never be okay. It's a scary thought, but it's reality.

The story goes that Stephen King finished this book and was so horrified by what he had written that he didn't think it should be published. He tucked it into a drawer and only took it out again when he was falling behind on his contractual obligations. It makes one wonder if there are other tales hidden away...

The first cycle of movies based on Stephen King books was already in full swing by the time Pet Sematary was published in 1983(we're in the midst of another one now). The first movie came out six years later and it has its share of fans. There's even a straight to video documentary about its production - I've seen it and it's pretty enjoyable considering I don't like the movie. While it may be a decent horror film on its own, I don't think it's a good adaptation of the novel and I've heard from other readers who felt the same. 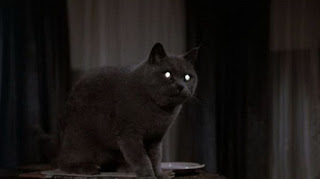 To be fair, it has a few things going for it. Fred Gwynne as Jud Crandall was brilliant casting. I have family in Northern Maine and I've met dozens of people who look and sound almost just like him. He's the best part of the movie by a long shot. The makeup effects are also very good, with the Zelda scenes in particular being especially frightening. The song by the Ramones that plays during the end credits is delightful...if completely inappropriate.

In fact, that's the whole problem with this movie. I love 80s horror but this is too much of a typical 80s horror movie for this material. It just doesn't feel...serious. Some of the most emotional moments from the book are rushed and silly. While it doesn't shy away from the dark plot points, much of the impact is just not there. Take the final confrontation between Louis and the evil resurrected Gage. In the midst of this brutal denouement, Louis takes a moment to tell the aggressive Church to "fuck off, furball."

Wow. All that's missing is Arnold Schwarzenegger blowing the cat away with a shotgun and quipping "De cat will NAT come back de very next day."

I was pissed off the first time I saw this movie. As the years have gone by, I've come to a more measured opinion of it. It definitely could have been worse. Still, I really hoped for a remake that would get it right. And then last year I heard there was one on the way.

On the whole, I would say this one is a mild improvement. The gloomy atmosphere is closer to the mood of the book and there is welcome attention to Louis's character arc, the man of science who thinks he's comfortable with the idea of death but seeks a mystical solution as soon as death hits home. The evil burial ground itself is a hell of a lot creepier looking, almost like something out of a German silent film. John Lithgow plays Jud Crandall more subtle, which is more in tune with the overall film but I missed the accent. 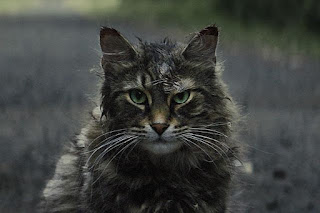 The first half is really very good and I was all set to come back here and write about how impressed I was. But then the second half started to go off in an ill-advised direction. In an interesting change, it's Ellie rather than Gage who gets killed. This itself was not a deal-breaker even though I think it was mostly done for practical reasons (i.e. not wanting to go through the hassle of trying to get a toddler to cooperate for the camera). But things continue to diverge from the novel up until the ending, where the entire family is dead and resurrected. On the surface, it sounds darker but it really isn't. I'll explain that in a minute.

The film is done mostly in the Blumhouse style where every scary sight needs to be punctuated by a loud metallic noise. I can't really blame that on the other movies of this era, not when so many outstanding horror films have been made in the past several years. It Follows didn't need any of this banging noise shit. Yet despite how grim and bloody the movie is, it is reluctant to fully embrace the emotional horror of its source. The actual scene where Ellie dies hits hard, as it should. But the movie clearly isn't comfortable sitting with that tragedy for long. The new ending seems to be a way to soften the blow, perhaps unintentionally. The family may be undead abominations but at least they're together. That's not nearly as scary as going on alone.

It's the same instinct that made Stephen King initially hide the book away. The thought that the public just can't handle the reality of a devastating loss like this. In the movie business when millions of dollars are on the line, this reluctance is even more pronounced. I think the popularity of the book shows that we can handle the truth (sorry, Colonel Jessup). I'm not sure a big studio movie will be able to really capture this book, but it's always interesting to watch them try.

Posted by Norphen at 4:12 PM No comments: