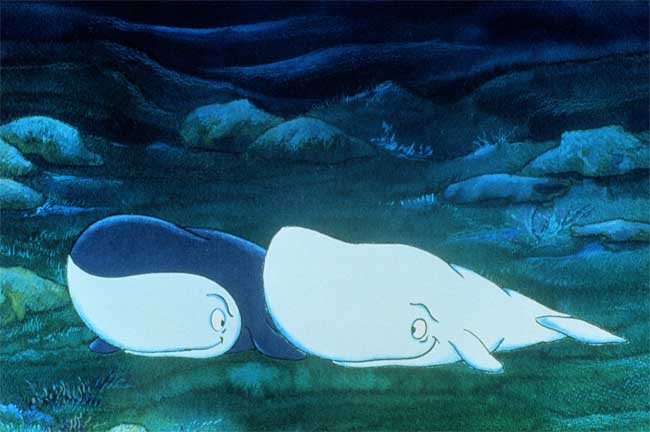 I know I keep teasing The Pirates of Dark Water, and that one is in progress, but in the meantime I suddenly remembered another major piece of my childhood. I hadn't thought about this tiny little Danish animated film in years, but when my wife was singing "Baby Beluga" to my newborn son Andrew recently, all of a sudden images from it flooded back. The movie actually has nothing to do with that song, but I think my parents bought it for me because I was listening to the song all the time and would probably enjoy a cartoon featuring whales.

Samson and Sally, sometimes given the subtitle "The Song of the Whales," was released in the United States on VHS back in 1990 but has become more obscure over the years and has still not seen any sort of digital release. However, I was able to find the entire film on YouTube and watch it for the first time in about 20 years. Even though I hadn't seen for ages, I had watched it a lot of times back when I was kid, so the entirety of it was instantly familiar. The movie is a coming-of-age story featuring an albino sperm whale named Samson, who becomes best friends with Sally after her pod is slaughtered by whalers. In fact, a lot of whales die in this movie...including in one sequence that's almost a shot-for-shot underwater remake of the legendary scene in Bambi. A lot of children's films from this era were pretty grim, including Disney films like Oliver and Company and the entire filmography of Don Bluth (especially The Land Before Time, which I must have watched 500 times growing up). Something about the 1980s had a lot of animators feeling hopeless about humanity and the world and there's a stark sense of futility that hangs over the second half of Samson and Sally.

Eventually, Samson embarks on a quest to find none other than Moby Dick, who is a mythic figure to the whale community. To find the great white whale, he navigates through numerous man-made hazards like oil spills and barrels of radioactive waste. The environmental message in this film is not subtle - the first oil spill sequence is absolutely harrowing as the whale pod makes a mad dash underneath the sludge, hoping that they can hold their breath long enough to make it. Just after that, the camera pans up and we see just how huge the spill actually is. When Samson finally finds Moby Dick, the movie turns downright dystopian. The ancient whale, now so feeble he can't even catch his own food, lives in a sunken New York City. You gotta give the writers credit for showcasing the potential consequences of global warming decades before that term was so common. It's obvious that Moby Dick isn't going to be any help, so a disillusioned Samson has to return to Sally and the rest of his pod and then just get by as best he can. The ending is sort of happy, although there's not much hope in it. On this most recent viewing, it left me with a powerful feeling of melancholy.

It's becoming very clear that the one thing that unites everything featured in this series so far is melancholy. Even that ridiculous Felix the Cat movie had a bit of a dark edge. As a kid, I learned unusually early that the world was a harsh and unfair place. When the entertainment I watched didn't reflect that, it didn't stick with me very much. But when it did, I never forgot it. It felt like someone was showing me the world as it actually was. The movies and shows I latched on to helped me deal with loss that was too overwhelming to address directly at the age I was at. Now that I've sought these stories out again, they are having a much different effect. They help me see the overarching narrative of my life a little more clearly, which is something I really was hoping for when I learned I would be a father.

I just can't understand when people complain about children's shows or movies being "too dark." Obviously it would be a stupid idea to show a kid something like Martyrs or Cannibal Holocaust, but insisting that children only consume entertainment that is completely vapid and saccharine strikes me as profoundly stupid. For a kid who was dealing with overwhelming darkness and too shy to reach out for help, this stuff was there for me. I felt heard. Would you take those healing experiences away from me just for the sake of your squeaky-clean delusions?
Posted by Norphen at 12:11 AM No comments: