Tales From the Crypt: Season Three, Part One 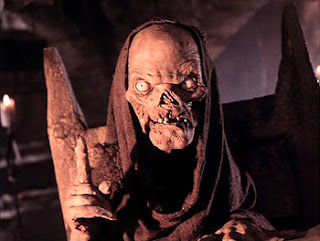 Loved to Death: The season premiere tells the sleazy tale of a lonely creep screenwriter (Andrew McCarthy) who is obsessed with old-school Hollywood and fixated on his neighbor, a B-movie actress (Mariel Hemingway). When he acts like a moron and alienates her, his evil landlord gives him a love potion for his own twisted amusement. Naturally, things go wrong fast. On the surface, it’s very silly but this episode is saved by a rich subtext of how entertainment gives men ridiculous ideas about women and romance. B

Carrion Death: An episode starring Agent Dale Cooper himself, Kyle McLaughlin. He plays a notorious escaped convict who ends up handcuffed to a dead police officer. Now he has to drag a corpse through the searing desert if he wants to reach the Mexican border. The episode can’t resist some outrageous slapstick gore at the end and in general, this is a fun and well-paced tale. B+

The Trap: You can get a lot of money through life insurance, the problem is you have to die before they fork it over. In this episode directed by Michael J. Fox (who appears near the end), a bullying jerk (the great Bruce McGill) strong-arms his wife (Teri Garr) and his mortician brother (Bruno Kirby) into helping him fake his death so he can collect the funds. However, once his accomplices get a taste of life without him, they find it hard to go back to the status quo. Fox infuses the episode with black comedy and stages some laughably crass sequences on the way to the devilish ending. A-

Abra Cadaver: The lewd opening of this episode ensures it will never appear on basic cable. Two bickering brothers who are both doctors (Beau Bridges and Tony Goldwyn) disagree on whether or not brain activity continues after death. The brother who backs the theory takes some truly drastic measures to prove it, leading to a mind-bending storyline with a whopping triple-twist ending. It can be on the slow side, but the core concept is interesting to think about. B+

Top Billing: This tiresome showbiz farce shows that some of the weaknesses inherent in adapting these comics are still popping up. An obnoxious struggling actor (Jon Lovitz) goes to extreme lengths to get a part in Hamlet, but it’s not the role he thinks it is. The awesome final twist is classic EC comics, but seven pages of buildup is a lot easier to enjoy than 20 minutes. So far, I’ve seen that the success of Tales from the Crypt episodes are determined by how they deal with the expansion needed to accommodate the TV show format. In this case, having to tolerate Lovitz’s antics was asking a little too much. For some reason, this particular episode attracted a lot of recognizable stars to tiny roles – Oscar winner Louise Fletcher appears for about 30 seconds as an agent. C+

Dead Wait: Most of this show’s strong episodes have been pulpy fun, not truly scary. But when you bring in Tobe Hooper, director of the horror masterpiece The Texas Chainsaw Massacre, you’re gonna get scary. James Remar plays a thug who infiltrates a plantation to try and steal a rare black pearl from its owner (John Rhys-Davies). However, a voodoo priestess (Whoopi Goldberg, who hangs out with the Crypt Keeper in the episode’s outro) is onto him. This show’s violence is generally goofy, but Hooper has a knack for making it extra visceral. There’s one scene in particular that’s amazingly putrid. A fun cast and a pro at the helm make this a satisfying episode. A-

The Reluctant Vampire: The show takes an unusually light touch with this episode about a modern vampire who works a night watchman at a blood bank, while helping himself to some of the goods, naturally. However, the discrepancy has not gone unnoticed. It’s a silly episode, but the script does well with funny details and Malcolm McDowell’s funny, eccentric performance as Donald Longtooth make you root for him. Also fun is Michael Berryman, the distinctive-looking actor from The Hills Have Eyes, as a zealous vampire hunter. B+

Posted by Norphen at 5:24 PM No comments: