As the long list of honorable mentions makes clear, 2012 was an outstanding year for movies. It was such a strong 12 months that I entertained the idea of expanding this annual column into a full-on Top 20, although in the end I opted to stick with tradition. It was the polar opposite of 2011, where this already-tardy list was delayed by another two weeks as I frantically sought out various films in the hope that I would finally find ten that I felt good enough about.

It's a good thing we saw such an improvement this year, because film culture is in very real danger of being completely supplanted by television. I can't think of any movies that generated as much interest as acclaimed shows like "Mad Men," "Game of Thrones" or "Breaking Bad." We're in the midst of an amazing period of television and we're going to need several movie years like this one in order to keep up. Someone more qualified can rank this year's television (I find it borderline impossible to be well-informed on both, so I choose movies). Here are my ten favorites. 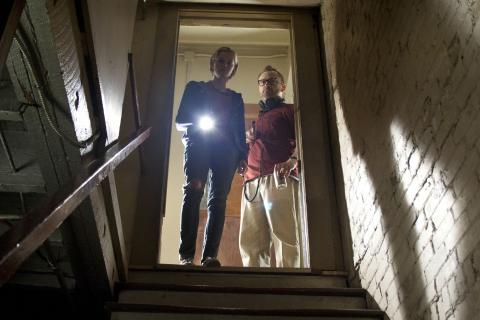 10. The Innkeepers
Horror had a very good year. A new group of young directors is moving away from the excesses of the "torture" era and with the "found footage" trend mostly burnt out, they are relying on good old-fashioned suspense. Ti West's The Innkeepers was the most impressive of this year's offerings, filmed at the real life (and supposedly haunted) Yankee Pedlar Inn in Torrington, CT. A masterful slow burn, it builds character and backstory for quite a while before the major scares start coming. When they do, they are delivered with a lot of ingenuity and creative restraint. One terrifying scene in the hotel's basement relies on the viewer's knowledge that a malevolent ghost is lurking just outside the frame without showing anything at all. If Alfred Hitchcock and Takashi Shimizu worked together, the result might look something like this.

9. Bernie
Richard Linklater's dark comedy is based on a true incident in suburban Texas, starring Jack Black as an affable, popular funeral director who becomes the prime suspect in a murder case. His neighbors just can't believe that such a pillar of the community would be involved in something so heinous and even when they are presented with ample evidence, make excuses for him. Many of these real-life folks are interviewed on camera, delivering dozens of eccentric homespun one-liners that add a distinctive tone to the movie. The actual storyline would be dull by comparison, were it not for Jack Black's career-best performance as Bernie.

8. The Raid: Redemption
The most thrilling action film I've seen in years. With too many modern blockbusters relying entirely on computer-generated replicas of actors when it comes to stunts, Gareth Evans's amazing Indonesian hybrid of kung-fu epic and police drama makes an unbeatable case for the power of old-fashioned fight choreography. When a raid on a notorious drug lord's hotel base turns bad early on, it's up to a few remaining cops (led by the very talented Iko Uwais) to fight their way past his vicious underlings. It's not the most original or intelligent story, but it's tough to get too worked up about that when your jaw's hanging wide open.

7. ParaNorman
The studio behind the awesome Coraline turned in another fantastic piece of stop-motion animation this year. A young outcast who can see the spirits of the dead becomes the only one who can avert a supernatural apocalypse, but the truth behind the spectral threats is much more complex than what viewers typically expect from a "kid's film." The movie has great fun at the expense of society's tendency to torment those who are unique, but also explores the real damage that stifling comformity can do. All that's just a bonus to the absolutely peerless stop-motion wizardry on display.

6. Cloud Atlas
I saw an unusual amount of three-hour movies this year and none of them flew by quicker than this staggeringly ambitious epic from the Wachowski siblings. Jumping back and forth through several different time periods, the movie creates one beautiful story of perseverance and the importance of the greater good. I'll be the first to admit that this is not a perfect movie - some of the casting choices are odd and a handful of scenes are so ridiculous they are downright laughable. But regardless, this was the most emotionally powerful experience I had in a movie theater this year. That has to count for something.

5. Lincoln
Daniel Day-Lewis, arguably the world's greatest actor, plays America's greatest president. How can anyone resist? The master's embodiment of Honest Abe goes against most popular depictions of him, particularly that reedy voice, but he makes you believe. The movie explores Lincoln's uphill battle to get the Thirteenth Amendment through Congress so that the freedom he promised in the Emancipation Proclamation could actually come to pass. The parallels between then and now are too numerous to count and the movie knows the viewers don't need any overt hints to make the connection. Director Steven Spielberg is as competent as you would expect, but it's the script by Tony Kushner that really makes this work. His period dialogue is highly satisfying, especially the withering oratory of Tommy Lee Jones as Congressman Thaddeus Stevens.

4. Wreck-It Ralph
This was the year Disney out-Pixared Pixar. The consensus on Pixar's Brave was that it was good but not great, an opinion I generally agree with. Then the studio's in-house Wreck-It Ralph made it clear that the witty, emotional brand of storytelling that made previous Pixar films so fun and powerful had not gone unnoticed. The movie takes its ingenious premise of a society inside the local arcade to amazing heights, creating a world so detailed and well-developed that it could support a whole season of television rather than just one film. Yet for all the superb world-building going on, the movie never forgets the small crew of characters at the center of the action. John C. Reilly's vocal work as the title character is a master class in this kind of acting and the script wisely balances out the requisite slapstick with a big heart.

3. The Invisible War
Kirby Dick may be the most skilled and versatile director producing documentaries these days. He made viewers laugh hysterically as he stuck it to the MPAA in the superb This Film is Not Yet Rated, but strikes a far more serious and appropriate tone for this painfully moving examination of the prevalence of rape in the United States military. The film gathers a group of very brave soldiers (and they're not all women) who open up about the abuse they suffered while serving their home country. If the incidents themselves weren't bad enough, they were met with indifference and hostility at the hands of the military's leadership. Americans like to brag about how much we "support the troops," but none of us have any business using that phrase until something is done about this. 2. Argo
Ben Affleck continues his impressive directing career with a tremendous dramatization of a recently uneveiled rescue mission that unfolded in the background of the 1979 Iran Hostage Crisis. The ending is a foregone conclusion for those who know their recent history and yet the movie is packed full of white-knuckle suspense. The drama is skillfully balanced with more comedic portions as CIA operatives work with Hollywood moguls to concoct a fake movie called "Argo" that provides the cover story for the mission. It turns out that both show business and international relations rely on a great deal of self-aggrandizing BS. There's a lot to like about this movie and yet the most valuable part might be the intro, which gracefully gives a brief history of the toxic relationship between Iran and the United States and provides invaluable insight as to why that country is so hostile to us. Spoiler alert - it's not because they "hate our freedoms." This complex reality is something America will have to wrestle with if we don't want to be stuck in a permanent state of conflict in that region.

1. Django Unchained
It's not very often that a piece of mainstream American entertainment forces us to confront the national disgrace of slavery head-on. Only a filmmaker with a reptuation like Quentin Tarantino's can expect studio support and a wide audience for a topic so inflammatory. And yet Tarantino never forgets he's making a movie, resulting in a wildly entertaining epic that's also an important reminder of our troubled history. Tarantino's a diehard fan of classic exploitation cinema and brings that sensibility to the film - it's definitely more than a lot of people will want to stomach. Still, when you hear the self-anointed moral guradians whine about the violence in this movie, it's important to remember that the reality was far worse. What people forget about exploitation films is that the best of them could use their intensity to make a powerful moral statement. I prefer violence that comes with a clear message, unlike movies that clinically present violence with no comment and then let other people argue about what the point of it is (i.e. Zero Dark Thirty). Django Unchained is a highly satisfying middle finger to the bigotry that still continues to have a strong influence on our national dialogue. It's also masterfully shot and full of great acting - Jamie Foxx, Christoph Waltz, Samuel L. Jackson and Leonardo DiCaprio are all excellent. This is my favorite Tarantino film since Pulp Fiction.

Honorable Mentions: Chronicle, Looper, The Cabin in the Woods, The Secret World of Arrietty, Silver Linings Playbook, Moonrise Kingdom, Sound of My Voice, Excision, The Avengers, The Tall Man
Posted by Norphen at 5:46 PM No comments: