New Heights in Insensitivity and Fearmongering

And no, don't worry, this isn't another entry about Hillary. I'm done scolding her for now...and it's not just cause she won big this past Tuesday, though that was pretty impressive.

Nope, I'm here to tell you all a little about the company I used to work for. Journal Register Company (or JRC) is a big corporation that owns hundreds of newspapers all over the East Coast, including the New Haven Register. I've also learned recently that they own a tabloid newspaper in New Jersey that is responsible for one of the most infamously offensive headlines ever.

There was a fire at a mental hospital down there in 2002. Here was the headline.

Yep, Roasted Nuts. Here was the National Alliance for the Mentally Ill's reaction.

"This one is so bad that many NAMI members initially couldn't believe that it was true-and not a hoax over the Internet."

But it was real, and here's a more recent example of the newspaper's class. This came out during the Roger Clemens steroid hearings in Congress. 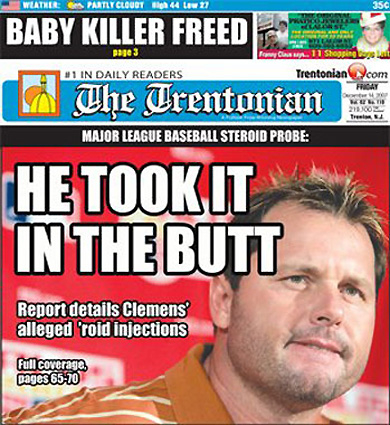 Moving on, today I was in Price Chopper picking up some lunch and on a whim, I bought 101 Dalmatians on DVD. This is the original 1961 animated film, not that Glenn Close remake with all the CGI puppies.

Now, I like these "Platinum Edition" Disney DVD releases. Despite their habit of always having a feature where a tween "Disney Channel" star sings one of the film's major songs, they do a good job. The Bambi DVD had a commentary composed of actors reading old production notes from the 1940s. It was pretty cool.

But one thing I'm really sick of is all Disney's bullshit about the "Vault." You have to have seen this at some point, they've been doing it since the VHS days. They put out one of their movies, and they say you have to buy it now, or else it's going back in the vault forever. Pinocchio's seen about five different VHS/DVD releases in the last two decades, despite the fact that each time was supposedly the last time for the rest of mankind's history on this Earth that it would be available in stores.

I mean really, can you think of any other movie studio that uses actual fearmongering to sell DVDs? Buy Pinocchio...or you will never have another chance. It's especially obsolete in today's times because all of these movies that are ostensibly in the vault now can be purchased on Amazon or other sites with the click of a button. You would think at least one person there would realize this bullshit has long jumped the shark, but nope. There it was on the little display rack for my 101 Dalmatians DVD.

Take your vault and shove it.
Posted by Norphen at 4:41 PM No comments: