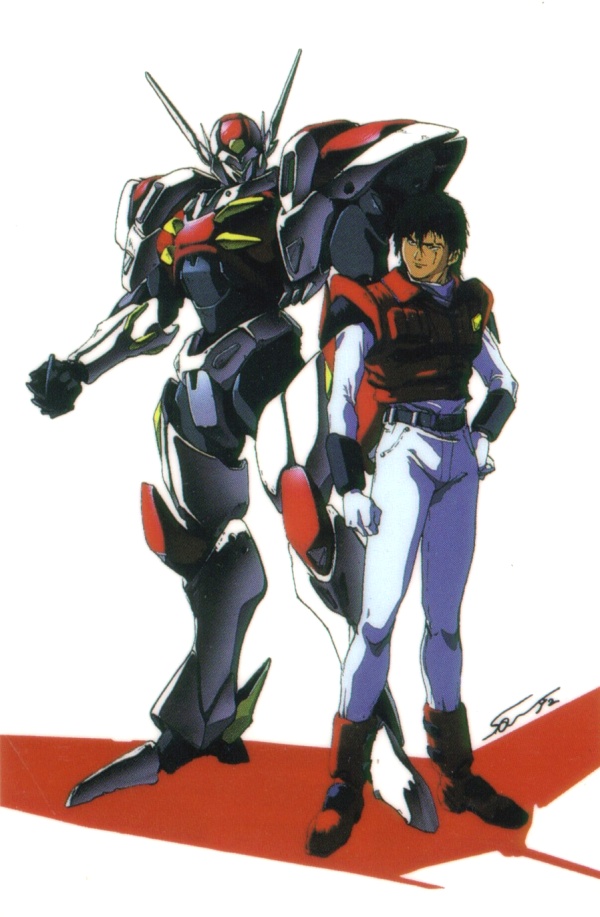 Teknoman (originally called Tekkaman Blade in Japan) was a show I caught just at the right time. It's life on American TV was brief and only about half of the show's roughly 50 episodes were even aired. It was shown on UPN at 7:30 am on Saturday mornings. If I hadn't been up early one of these mornings, bored and looking for a distraction, I might never have seen it at all. I followed it faithfully until suddenly it wasn't on anymore. That was always a tough adjustment for a kid in the 90s - we didn't have the internet to keep us all so informed about show cancellations and schedule changes and all that. So when I heard almost twenty years later that the whole show was on DVD, I jumped at the chance. It was an obvious candidate for the next installment of this "Nostalgia Series," although I'm not sure what to write about next. Maybe The Pirates of Dark Water? I'll entertain suggestions.

I don't think I could have articulated why the series grabbed me so instantly when I first saw it. After watching the whole show recently, I have a better idea. I already said in the Casshan entry that anime tends to lay the drama on thicker than American cartoons, especially during the era we've been talking about. This show has an overriding feeling of futility, desperation and true struggle...feelings that were all very familiar. Despite all the robots and aliens, this show was much closer than other cartoons to the world that I knew. There was also the music, this awesome techno theme that introduced and concluded each episode. I loved that theme. I remember putting a microphone up to the television speakers to record it so that I could have it on tape and listen to a grainy recording of it whenever I wanted. Thankfully, now we have YouTube.


I chose to watch it again with the English dub because that was what I remembered. It's the exact same one from the 90s and it commits most of the sins that drive hardcore anime buffs up the wall. Character names were Americanized. A feminine-looking male character was passed off as a woman (though with anime, the lack of massive cleavage on this "woman" is a dead giveaway). A bunch of James Bond-esque one-liners are delivered during battle scenes and I'm almost positive they were just grunts in the Japanese version...if I ever hear the phrase "sticky situation" again, it will be too soon. There was also a bit of censorship, but that's been undone for this DVD version. Still, after the first couple of episodes, I was nervous this was just going to come off as a hunk of cheese and not be the experience I remembered. However, the show's underlying power could not be diminished.

In the far future, Earth is at war with an alien race called the Radam ("Venomoids" in the English version). The show focuses on a group of elite pilots and mechanics called the Space Knights. This team has an uneasy relationship with the Allied Military Command, which is led by an authoritarian asshole named General Galt. One fateful evening, the Space Knights encounter a man who goes by the name "Blade" and has a crystal that allows him to become an armored warrior. Blade is more than the typical sullen anime hero, he has a serious case of post-traumatic stress from the experience that turned him into a Teknoman.

It is eventually revealed that Blade's real name is Nick Carter, and his entire family encountered the Radam during a benign space exploration. The Radam are highly-intelligent small parasites that seek out hosts to carry out their conquests. Before traveling to Earth, the Radam had enslaved a race of huge arachnid creatures (called "Spider-Crabs" by Earthlings) to serve as their infantry. Humans that encounter them are turned into Teknomen, brainwashed into servitude and assigned to lead the armies. Blade escaped before his transformation was complete, gaining the powers but retaining his free will. The others weren't as lucky, meaning that the evil Teknomen that Blade finds himself up against are all his loved ones - siblings and friends of the family. He may be able to save the Earth, but he'll have to destroy everyone he cares about to do it.

One of the best elements of the show's writing is that it always feels like the odds are totally against the heroes. The enemy Teknomen are much stronger than Blade, and on the rare occasions they are defeated, they learn from the mistakes and come back even tougher. The fact that Blade's original metamorphosis was interrupted comes with dire consequences. Any longer than 20 minutes in the suit and the brainwashing process starts again, threatening to turn him against his allies. Eventually, the Space Knights also discover the transformation is slowly causing his body and mind to deterioriate.

It's all a powerful metaphor for the horrors that come with war - most shows that pit the heroes against an extraterrestrial enemy aren't this honest about it. The human costs of war are hammered home over and over again, sometimes at unexpected moments. A sequence where Blade and his love interest Starr are exploring gets dark quickly when she finds a dusty, bloody doll underneath a pile of rubble. It says a lot without saying much at all. During the 1990s, it was likely intended as a commentary on the past rather than a dire warning for the future...but it certainly feels prescient today. I suppose the era doesn't matter in the end. That core message will always be releveant - the eventual winner of any war is Death.
Posted by Norphen at 3:41 PM 2 comments: