A Better Class of Criminal

It isn't often that you walk out of a superhero movie invoking the work of Martin Scorsese or Michael Mann as opposed to, say...other superhero movies, but Christopher Nolan's The Dark Knight is a complex, disturbing and intensely powerful crime drama that is far closer to the work of those greats than something like The Fantastic Four.

Since the events of Batman Begins, the first installment of a new continuity doing wonders to restore the Caped Crusader's reputation after the spectacularly awful Batman and Robin, Batman (Christian Bale) has taken a big bite out of Gotham City's crime, and has inspired the police force to step up their game. With the help of the new district attorney Harvey Dent (Aaron Eckhart), it seems like the forces of law enforcement can finally claim victory over the numerous mobsters in town...until the arrival of The Joker (the late Heath Ledger).

We see briefly that Batman has inspired a handful of other vigilantes, but the Joker is seen as his equal and opposite reaction. The brilliant street thug barrels onto the scene with his trademark purple suit and green hair without any explanation, though he does like to make up various backstories for himself. There seems to be no building he can't infiltrate, no intricate plan he can't pull off, no complex moral puzzle/nightmare he can't inflict on Gotham's citizens. 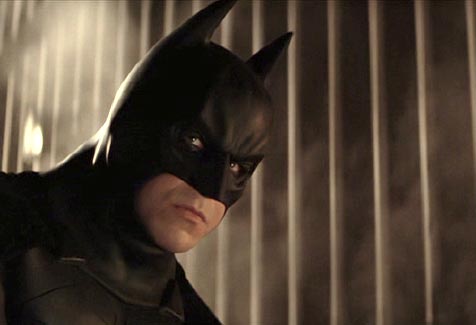 Faced with the mastermind's reign of terror, Batman joins with Lieutenant James Gordon (Gary Oldman) and Harvey Dent to fight back. For a while, it goes well...but not forever. At its core, The Dark Knight is a tragedy about three man who come together to save the city they love, and are all severely punished by a world gone mad.


If the relentlessly grim story wasn't heavy enough, the script (written by Nolan, his brother Jonathan, and David S. Goyer) is a multi-layered, though quite unsubtle, commentary on post-9/11 America. The Joker's rampage threatens to tear the city apart, and to the strained police force, bending the rules starts to look like a better and better idea. What principles are worth compromising to get him off the streets? What's a greater victory for a terrorist...causing mayhem and destruction? Or provoking a society to destroy its own moral foundations?

Even Batman wrestles with how far he should go to end the violence, installing his own wiretapping program in his headquarters to try and track The Joker. (And with the FISA law that just passed, he could probably get immunity as the head of a major corporation...)Thankfully, both the loyal butler (and former British secret service agent) Alfred Pennyworth (Michael Caine) and inventor Lucius Fox (Morgan Freeman) function as Batman's conscience, do their best to keep him from the edge. Yet even the final decisions made by characters at the movie's conclusion, while noble, seem short-sighted, aiming for a quick fix instead of a long-term solution.

As with Batman Begins, this film's pacing and attention to story detail are phenomenal. The story rockets ahead thanks in large part to the driving score and terrific editing. The cast is uniformly terrific, particularly Eckhart as Dent, though it looks like he will be inevitably overshadowed by...

Ledger.
I've always been careful to keep my enthusiasm in check while writing these sorts of things, lest I lapse into that one-sided fanboy ranting that's become so fashionable on the internet that it is a real danger to the future of film criticism that's actually informed by some kind of scholarship. Despite that, I'll say right now that I can't think of enough superlatives to describe Ledger's work as The Joker. He is every bit as good as you've heard, if not better. The idea that he could also play the cowboy in Brokeback Mountain feels nothing short of mindblowing at this point.

Cesar Romero's 60s Joker was good for a laugh, with his bizarre plots like turning Gotham's water into jelly. There will always be much to appreciate about Jack Nicholson's classical approach to the character back in 1989. And of course, I'll always love the hilarious voice over work from Mark Hamill in the 90s animated series. But this is the darkest, most frightening version ever imagined of one of the great villains in the history of fiction. The Joker's battle with Batman is just as much philosophical as it is physical. He's out to prove that laws and society are a joke, and if he can get Batman and the Gotham police force to betray their own laws and principles to stop him, then he's won.

As marvelous as it is, the movie isn't quite perfect. Christian Bale is a great Bruce Wayne, but his raspy Solid Snake growling as Batman veers dangerously close to self-parody. Some of the action scenes, particularly the final big one in a skyscraper incorporating SWAT teams and a weird blue "sonar-vision" gimmick, are not as well-staged as they could be. The film's intent to keep rollicking forward takes a bit of a toll as well, leaving a handful of little continuity issues. Despite the long running time (over 2 and a half hours), the ending is abrupt, leaving a number of loose ends in the story. It's still one of those endings that will give you chills, but it also makes you wonder what sort of storytelling gymnastics will be required to piece it back together in a third movie.

But of course all of these things are easily forgiven. This masterful epic seems poised to break box-office records, and it deserves to.
Posted by Norphen at 11:21 AM No comments: